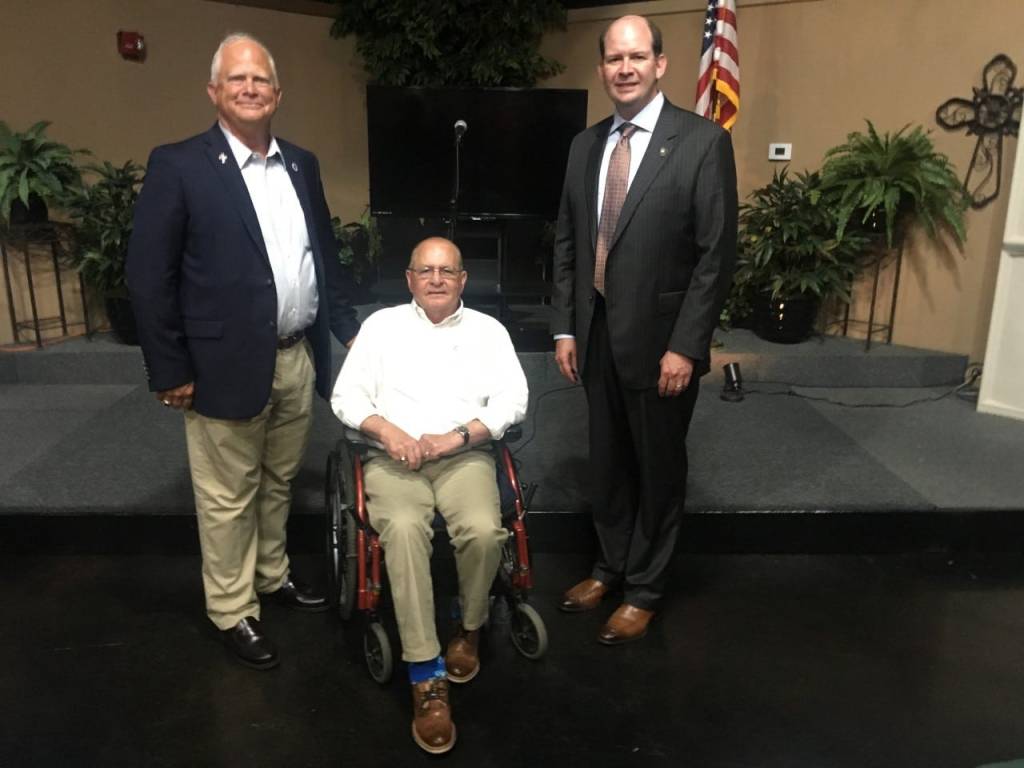 Three elected officials visited DeRidder to discuss the most recent legislative session and to answer questions from concerned citizens regarding various issues of local, state, and national interest.

One of the issues discussed at length was the need for tax reform to make Louisiana more competitive with other states.

Reese said: “One of the things I’ve talked a lot about is the need to make our state more competitive, more attractive for businesses to come and locate here, and more attractive for citizens to want to come here and stay here. One of the areas that is really holding us back is our tax policy in Louisiana. It is too complicated, not competitive enough, and there are many companies and people that write Louisiana off the list before they ever come here and give us a look.”

The proposed constitutional amendment that will be on the ballot this October will remove the federal income tax deduction, in exchange for a lower maximum tax rate of 4.75 percent, down from the current rate of six percent.

Reese emphasized that these changes would make the state more competitive and more enticing for people and businesses to stay in Louisiana.

Another topic that was discussed was the passing of the Granting Unserved Municipalities Broadband Opportunities (GUMBO) fund program. The program seeks to increase broadband internet access in underserved areas across Louisiana. The fund consists of $90 million from the federal government to put grants in local communities and municipalities.

Reese noted that the pandemic brought the need for quality internet access to the attention of many state leaders.

“Nothing was highlighted more for us in the pandemic than the lack of access to broadband activity in parishes like Beauregard,” Reese said.

He also noted the struggles and challenges many people had with working remotely, and online education for their children due to the lack of broadband access in these communities.

Many other projects that were successfully funded were discussed including repairs for the Beauregard Parish Jail, assisting the BPSB with their insurance deductible payments after the hurricanes, and many other road and infrastructure projects.

Another topic discussed was the upcoming veto override session set to begin on July 20. Governor John Bel Edwards vetoed 28 bills during this most recent legislative session. One of the more controversial vetoes was SB 156, known as the Fairness in Women’s Sports Act. The bill was intended to keep biological males from competing against biological females in intercollegiate, interscholastic, or intramural sports teams.

Edwards vetoed the bill claiming among other reasons that it unfairly targeted transgender children in Louisiana.

In his veto of the bill, Edwards said: “This bill will not be signed into law because it is targeted, unfairly, at children. This legislation will make life more difficult for children who are going through unique challenges gaining acceptance in their schools, communities, and even their own families.”

In response to this Carrier noted that he was surprised that the governor would veto the bill, calling it a “lose/lose” situation for the democrats. He strongly expressed his belief that the bill protects female athletes and promotes fairness in sports.

Owen expressed similar sentiment regarding the issue and supported overriding the governor’s veto of the bill. “This is a cultural line in the sand,” Owen said. “I am not going to surrender our girls.”

When asked how citizens can support the veto override, Owen asked first for citizens to pray for him and his colleagues.

“The first thing I can tell you to do is pray and to be active. We have hard moments down there, and I can tell when people are praying for me because I can get through the hard moments.”

Owen advised citizens that want to help with the veto override to be vocal, write letters, and make contact with their representatives to show their support.

Reese explained the veto override process stating that it would take two thirds of both legislative bodies to override the veto. Reese expressed that it would be tough to override the veto, but the support from citizens does indeed make a difference. Reese also noted that even if the override fails, residents should not be discouraged because he and his colleagues will continue to introduce bills in future legislative sessions that they believe in, no matter how long it takes to get them passed.

Reese said: “In the event that some of those vetoes are not overridden, please don’t be discouraged. I can promise you that we’ll bring [the bills] right back in the next session, and we will continue to bring them back until we get those kind of good policies in the state of Louisiana. Some of those may take a governor that thinks differently than the one we have now.”

Other topics discussed at the forum included, but were not limited to, education, social security, election integrity, protecting the unborn, and redistricting.

Reese, Owen, and Carrier expressed their gratitude toward the citizens who came to speak and ask questions at the forum, and to all citizens who support their endeavors.

Reese said: “Thanks for what you’re doing. It really is a huge benefit for us to hear from folks in our community about what is important to them.”